I thought Christians didn’t worship false idols. But what do I know, Unitarian-Buddhist-Pagan that I am? According to the Christian Broadcasting Network, Prayers are needed for global economy:

In January of this year, Cindy Jacobs was in a worship service when the Lord spoke to her, “Cindy, the strongman over America doesn’t live in Washington, DC – the strongman lives in New York City! Call My people to pray for the economy.” …

For these and other reasons Cindy is calling for a Day of Prayer for the World’s Economies on Wednesday, October 29, 2008. They are calling for prayer for the stock markets, banks, and financial institutions of the world on the date the stock market crashed in 1929. They are meeting at the New York Stock Exchange, the Federal Reserve Bank, and its 12 principal branches around the US that day.

“We are going to intercede at the site of the statue of the bull on Wall Street to ask God to begin a shift from the bull and bear markets to what we feel will be the ‘Lion’s Market,’ or God’s control over the economic systems,” she said.  “While we do not have the full revelation of all this will entail, we do know that without intercession, economies will crumble.”

So hundreds crowd about the sacred bull on Wall Street: 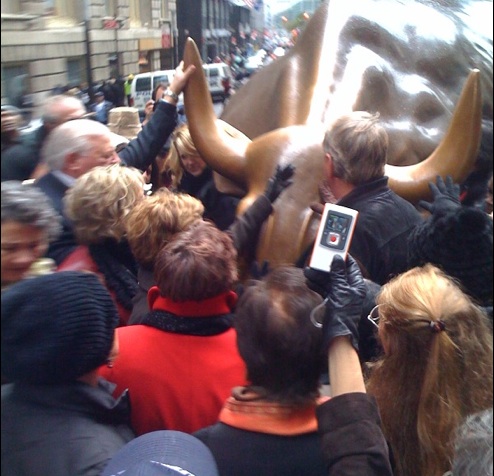 We are as mad as Midas.