Living out of a few boxes ain’t so easy.

All my stuff is in a storage unit except for: 2 suitcases, 2 boxes of files and office stuff, a box of random kitchen & bathroom stuff and a box of books. Oh, and the laptop on which I write.

Since I’m house-sitting for two different friends till mid-February I don’t have to worry about a bed, a refrigerator and the other necessities of civilized life.

But already I’ve had to trowel into the bowels of my storage unit, seeking this or that particular thing that I suddenly need and I KNOW IS IN THERE SOMEWHERE. But damned if I know in what box it lurks.

You see, in the throes of moving you simply can’t label every single thing that goes into each box. Where is the lined cutting mat I need in the design class? The sketch pad ? I must have a gazillion partially used pads tucked away — did I pack them with office stuff, art stuff, sewing stuff, random stuff?

And where is the white blouse my volunteer usher gig requires?

A friend suggests that every time I open a box and don’t find the thing I’m seeking, I write on the box for next time: “sketch pads not in here…” “no white blouse inside”.

I eventually found the white blouse, but I ended up buying yet another sketch pad.

Sandra Tsing Loh may enjoy living peripatetically, but it’s wearing thin for me.

I’m not the only writer living out of her car…

The current issue of The Atlantic Monthly has a piece by Sandra Tsing Loh, “On Being a Bad Mother,” which features a description of her “mobile home” – a paper-filled Volvo station wagon:

I am bad because after a domestic partnership of 20 years, when my kids were still elementary-school-age, I fell in love, had an affair, admitted it, and quite deservedly got tossed out of the house on my ass. Currently between homes (my earthly belongings reside in a 10-by-10-foot windowless U-Haul storage unit whilst I alternately house-sit, pool-sit, and cat-sit), I furtively park at the curb of my former home for an extra few minutes after dropping my kids off and, with my laptop, I steal wireless. Approaching 50, I am living a life that is less sunlit Waldman/Chabon than tattered Charles Bukowski.

My situation is less grimly colorful, thank goodness. I am peripatic by choice, not bad behavior. My Toyota minivan has space for more crap than a Volvo station wagon (I know this from experience… I had a VSW, in my “good mother” days). Plus the Toyota’s windows are darkened so passersby can’t see the crap.

Finally (neener neener NEEner, Sandra), my storage unit is almost twice as big. Though this may not be a plus in my favor.

Like Sandra, I am house-sitting, pet-sitting, and wireless stealing while I figure out what’s next. (No pools to sit where I am…).

The downside of living out of a couple of suitcases during the holiday season is that my meager wardrobe seems always to be one garment short of the perfect outfit. Sneakers with velvet pants, thin rain slicker over a little black dress when it just snowed. The slacks are right but the top is hopelessly rumpled.

It would help if I stayed long enough in one spot to hang my clothes in a closet. My next house-sitting gigs back in the Portland area are three weeks each – remind me to empty those suitcases.

And Sandra, why don’t you and I make a New Year’s resolution to get our cars (homes) detailed next week… We’ll both feel so much better.

Thank god for ex-husbands who are still friends

My ex has been feeling more anxious about my move than I am, so to calm himself he offered to help oversee yesterday’s Big Move. Stuffing my Stuff into Storage. Squeezing Drusilla’s foot into Cinderella’s tiny glass slipper.

My storage place offers a 16’ truck for such occasions ($20), and my plan was to pick it up at noon so the two strong lads I hired at $25 an hour would be ready to boogie after their morning final exams.

The truck was so huge (to me) and the s-curve of my driveway so challenging that I was grateful Martin could handle it instead. I’d have taken out the mailbox, the rock wall, and at least one fender.

Mart decided to put the boxes in the smaller one and the furniture in the bigger one.

The first run was a truckful of boxes. Me taping and labeling straggler boxes as fast as they hauled them off. Carefully noting on top and sides the most significant box contents.  They stuffed that unit to the rafters.

Then came the furniture. I had gotten rid of most of the big stuff, or so I thought. But I forgot about all the chairs and tables. 8 dining chairs, 2 office chairs, 2 living room chairs. A dining table, several side tables, etc. none of which fold well. Mart wove the pieces together into an intricate web of legs – again to the rafters.

Oops! we forgot the oak commode in the guest bathroom.  And what about these lamps? Do the garden tools in the garage go?

It was all done well after dark.  Oh, and it was 18 degrees out. At least it was dry!

No way am I going to be going to the storage place hoping to pull out just this one box or that chair. It’s gonna be all or nothing when I need something. Like when I move into my next place, wherever/whenever that’s going to be.

Filed under 101 Reasons to Downsize, Downsizing, Furniture, Getting organized, Storage

My daughter, my angel 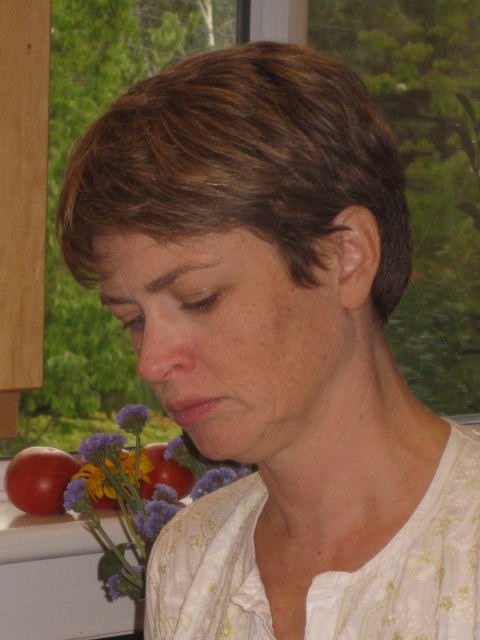 I don’t know how anyone downsizes out of the big family home alone. The job is immense and takes five times longer than you could possibly imagine.

My daughter has been here for four days – left her usual job as Household Administrator and Sanitation Engineer in Oakland, California so she could perform a ramped-up version of the same duties with me in Vancouver, Washington.

I kiss the ground on which she walks.

Together we have sorted, tossed and packed unbelievable amounts of stuff.  Evidently my belongings were stored under pressure, because when a cabinet door is opened, its contents explode into a heap fifty times the size of the cabinet dimensions. Kind of like one of those paper-thin sponges when you add water.

I have this thing about like being packed with like. Kitchen pots with kitchen pots. Sweaters with sweaters. Tstchotchkes with tstchotckes. This makes packing a challenge, especially for volunteer help who just want to get the stuff stuffed.

My daughter notes, correctly, that when you pack really heavy kitchen pots you need something light and fluffy to cushion and fill the box so it is still carryable. So I have pots and sweaters in a box, tstchotckes and towels in a box, books and undies in a box.

You get the idea. Like with unlike. The boxes are labeled, but not so specifically that I could actually find the blue sweater without searching through all the boxes in which sweaters may be the only cushioning material.

Boxes are now piled in every room. Goodwill is better off too. I sure hope I have sufficient storage space!

Despite all this concerted effort, when Heather leaves tonight I’ll still have days of work ahead.

Tagged as Downsizing, packing, too much stuff